Written and Directed by R.Srinuvasan

Touted to be the 25th film of Vidhaarth, this flick showcases an unexpected knot with the protagonist vested with the power of seeing what would happen the next day through his dreams the previous night. In case, he wants to find out a loose end, he has to go through that dream yet again after repeating the same rituals of the previous day!

Marimuthu as the dad of Vidhaarth has done a neat job as a Corporation Lorry Driver and the relevant scenes are very natural just like his performance!

Vidhaarth too has executed himself well and his coldness towards his dad prior to the latter’s accident as communicated through Voice Messages through What’s App. deserve mention for the manner it has been used innovatively!

Dhanya Balakrishnan is a wrong choice to play the female lead as she falls short of expectations. But the twist to her character as revealed in the latter half of the film is quite a revelation!

Subbarayan (Marimuthu) loves his son Shankar (Vidhaarth) most dearly but keeps blaming his son for not finding a job.

As Shankar is desirous of joining the police force, Subbarayan decides to seek voluntary retirement and use that fund to get his son the job of his choice!

Unfortunately, he gets involved in a road accident and gets hospitalised. Shankar is devastated but tries his best to save his dear dad and in the process realizes that it was not an accident but a planned act!

How the puzzle gets solved in the interesting rest.

There are certain loopholes but overall the film is worth watching.

there is a particular dialogue that is worth mentioning-

Vidhaarth says- Mother's role will be replaced by a wife after a point but never a father's role! 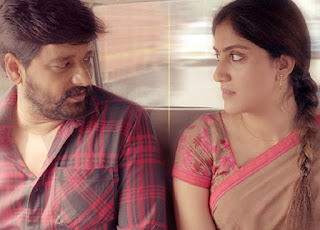