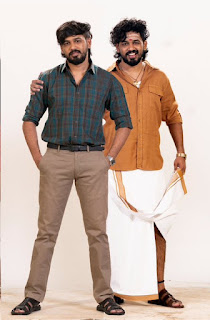 Written and Wielded by – Ashwin Raam

With a time tested theme of twins getting separated at an early age and later switching places to strike hard at the villain, Pasupathi (Vidhaarth, in a negative role, surprisingly!) who had caused confusion in the family by primarily getting a couple-Prakasam (Saikumar, cast in a positive role!) and Lakshmi (Asha Sarath, very diplomatic!). Muniyandi (Napolean) who is Lakshmi’s father is a big shot in that village. Lakshmi bears twin-boys!

Years hurry past and now Arivu is worldly-wise while Anbu is an enthusiastic rural lad!

Just about time for dramatization of scenes and situations as Arivu decides to set right things.

The film is a tad too long and the debutante director takes his time to set the scenario in order!

As the cast is strong, performances are good enough.

The screenplay is characterized by clichéd sequences at places especially in the first half and the second half is several shades better!

The film runs on expected lines but still manages to keep the audience hooked!