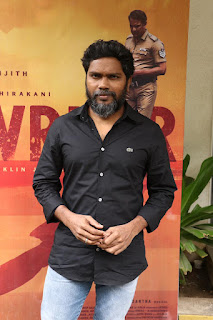 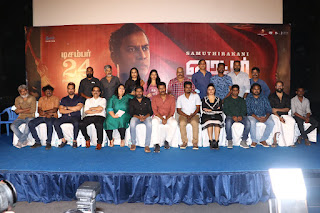 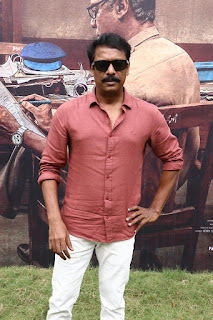 Director Pa. Ranjith’s home banner, Neelam Productions has always been a forerunner with respect to presenting themes that are unique and offbeat!

Franklin Jacob, an erstwhile deputy of Pa. Ranjith has helmed this flick that hits the screens on December 24th 2021.

Samudrakani who is both a director and actor rolled into one, plays the protagonist.

Several film personalities on and off the screen of this discerning flick participated and made their remarks all of which were soaked in positivity!

The theme is centred around those cops who are not necessarily a part of routine action while delivering their duties on a day to day basis but those lesser significant ones who are involved in the back end processing!

Govind Vasantha,the film’s composer spoke elaborately on the nuances of the script and how it offered him challenges while composing the music.

Samudrakani threw light on his extra efforts he had taken while he prepared himself to present the character.

Director Franklin explained how he had put in his heart and soul into the making of the film!

All the guests praised the project without any reservations while showering heaps of praises on Pa. Ranjith and the production team.

All set for a grand release!