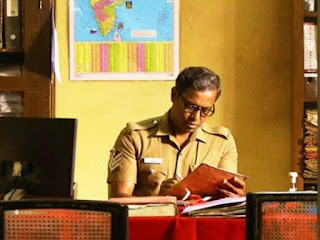 With a tight script and power-packed performance by Samudrakani, this discerning flick bankrolled by Samudrakani with Franklin Jacob at the helm, is certainly one of the best movies of this year!

The theme set around cops belonging to the police department who aren’t burdened with powers to act the way they want while exploiting and destroying the lives of innocent civilians!

Samudrakani is such cop serving as a Writer in a rural police station who is hell bent upon forming a Union for the sake of those in his cadre, much to the displeasure of a senior cop (Bose Venkat) who gets him transferred to a city.

The Writer is not a super hero kind of cop who bashes and thrashes goons even when assigned with field jobs. He is in fact a down to earth person with normal weaknesses as shown in a very natural manner in the film.

At the city, he is assigned to keep guard on a research student on whom charges are levied on debatable grounds.

As the tale unfolds, the mystery behind that arrest gets complicated further and it is a case of exploiting the commoners on reasons that are best kept as secrets!

How the problem gets solved is the interesting rest.

The screenplay travels in a well carved out path but falters at places casting an impact on the film’s tempo.

Yet, it is a movie that tugs your heart for long even after leaving the theatres!