Naveen Krishna who had earlier directed Nellai Sandippu has woven a horror thriller laced with fantasy elements this time!

Raksharaj has scored brilliantly in the title role and her pretty face expresses effectively.  She is 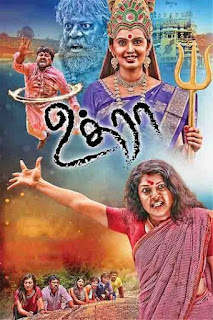 also good in the scenes in which she engages herself in a one-to-one conversation with the Goddess.

The camera work of A.Ramesh is truly breathtaking as he has captured the pristine beauty of the mountainous terrains in a very commendable manner.

The theme is set around the lives of a community living alongside mountains.

Owing to a bad incident that happened years earlier, whoever ties the nuptial knot gets killed the same day and hence weddings do not take place as the ritual of consummation proves fatal to the newly-weds!

A bunch of college folks arrive there to write about the strange customs of that place as a part of their project work!

At their initiative, a young pair gets married but then fate strikes a cruel blow yet again.

The students decide to probe further and the facts that they unearth which are narrated through a lengthy flashback give a jolt!

The climax portions could have been executed a few shades better!

Kausalya makes a belated appearance in a cameo character.