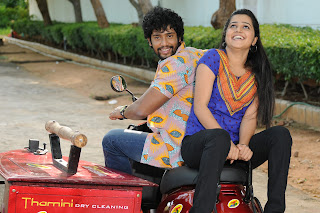 Written and Wielded by Manika Vidya

The title could be construed from two angles-about being an alcoholic and the other being a water supplier. Well, here, it pertains to both as the protagonist of the film is both an alcoholic and also a guy who goes around in a mini lorry kind of automobile to supple water.

Veteran character actor, Thambi Ramiyah appears in a character-role laced with humor, and as usual, scores brilliantly! Umapathy, his son, plays his son here again! The scenes were Umapathy and his friend Bala Saravanan appear, humor courses through liberally in abundant measure but of course, it slightly goes overboard on some occasions like the scene where they both go to a bar in the guise of females and the scenes that follow!

Samuskruthi is subdued as the heroine with a subtle performance.

It is Vinudha Lal playing the District Revenue Officer who steals the show by her effective portrayal in a character with shades! Her blue eyes express a lot, that too, much more than her spoken words!

Naren as her dad makes a one-scene appearance but is effective.

The theme set in the city of Madurai, is about two friends, Sundara Mahalingam (Umapathy Ramaiyah) and Ganesh (Bala Saravanan) are two friends who spend time drinking besides supplying water to the neighborhood.

Dhamini (Samuskruthi) and her sister Lavanya (Vidhulekha) run a cloth-washing unit on a mass scale. At one point, Sundara Mahalingam and Dhamini are drawn towards each other.

The arrival of a new DFO, Prema Sankaran (Vinudha Lal) brings about changes in the lives of all the four-Sundara Mahalingam, Ganesh, Dhamini and Lavanya.

The rest of the plot is about how issues get sorted out.

The film’s length could have been pruned a bit.