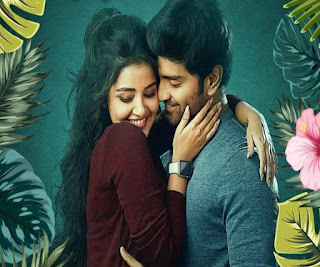 A remake of the Tollywood film, Ninnu Kori (2017), this is an offbeat tale of romance with the hero, Karthik (Atharva Murali) on seeing issues cropping up in winning the hand of the heroine, Pallavi (Anupama Parameswaran) his lover, turns down her proposal to elope.

While he leaves station to pursue his professional career, she gets married to Arun (Amitash Pradhan) at the instance of her dad (Aadukalam Naren).

Time hurries past and she has now shifted abroad and is leading a happy life with Arun.

Same is not the case with Karthik who still keeps nursing his love while nursing alcohol glasses!

Chance brings Karthik and Pallavi and she tells him that she is happily married. On the contrary, Karthik tells her that she is trying to dubious life and if she is prepared to opt out of it, he would be too glad to re—join her!

To prove her point, with the consent (!) of Arun, she invites him to come and stay with them both for a while to realize that they are leading a happy life!

It takes time but Karthik realizes that they both are truly happy and it is now time for him to step out of their lives!

A theme that is stretched a bit too far!