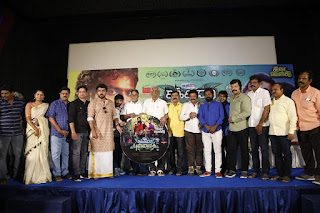 Bankrolled by Nabeeha Movies Production, this flick carrying a poetic title has been directed by Mahesh Padbanaban. Rudhraa and Subiksha play the lead roles.

While the songs have been penned by Kattalai Jaya, the music has been composed by Rajesh Appukuttan and Rudhraa.

It is worthy to mention that the film has already bagged 8 awards globally.

The film’s protagonist is a gold medallist in audiography while the heroine is a Radio Jockey.

The theme is about a documentary for which both of unite despite differences!

Three Face Creations is releasing the movie on 24th December.

R.V.Udhayakumar, Ravi Maria, K. Rajan, P.T.Selvakumar and others spoke on the occasion highlighting the unique features of this production that has already won the hearts of many at various film based forums bagging acclaims and accolades all the way!

It wouldn’t be out of place to state that the film is one among the most awaited movies of the season!

The film’s Trailer upped expectations to dizzy levels and the film is certain to become a hit with appreciation from all quarters!

Biju Viswanath’s cinematography is another fine point of this film as evidenced in the Trailer!