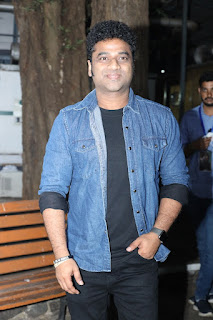 ROCK STAR TO GO BEFORE THE CAMERA!

Will make my acting debut soon:  A DSP exclusive on Pushpa & more...

Music composer Devi Sri Prasad is on cloud nine following the success of 'Pushpa - The Rise'. The movie directed by Sukumar and produced by Mythri Movie Makers in association with Muttamsetty Media was released in multiple languages recently.

Allu Arjun, Rashmika and Fahadh Faasil played the prominent roles in the flick. Songs from the movie have become a huge hit pan India and the BGM for the film too was much appreciated by all.

In an exclusive interview, Devi Sri Prasad talks about the work that went into the music for the movie and much more.

*How do you feel about the success of Pushpa's songs in all five languages?*

I am really happy and excited. The effort that went into all the songs has really paid off. It almost took me one month to complete each and every song in the film. I meticulously selected the singers to suit a particular language.

In fact Andrea Jeremiah who sung the 'Oo Solriya' song in Tamil was busy with a shooting. She took permission from the shoot and sung the song. I am thankful to all the singers and lyricists who cooperated well.Viveka has done a wonderful job with the Tamil lyrics.

Sid Sriram was excited to sing 'Srivalli' as he felt this was something new to him. All five songs look more authentic in their respective languages. We were clear that this is not a dubbing film, but a pan Indian flick and we wanted the quality to be on par with it.

*How do you handle success?*

Whether it is success or failure, I always take it to my heart and not to the mind. We put in the same efforts for all songs and some of them become hit and some do not. We will have to be prepared for both. What is important is the hardwork and consistency.

About your chemistry with - Sukumar and Allu Arjun ?

Allu Arjun and I are very close friends. He is a very hardworking and dedicated actor. I cherish his success and the feeling is mutual. I was also one of the main guys pushing him towards Tamil cinema. He asks for my opinion on a few things as well.

I am very happy that Pushpa had a good reception in Tamil cinema. Sukumar is like a brother to me. He is one of the most loving persons I have met. He is also very sensitive. All three of us have mutual understanding which reflects on screen in the movies that we do.

*How much liberty did you have while scoring BGM for 'Pushpa'?*

As far as Sukumar is concerned he gives complete creative liberty. During the BGM recording, he could not come and infact asked me to send it once it was completed. That is how much he trusts my work.

I wanted him to watch the BGM as it was a new attempt. But he insisted on sending it. He made some minor adjustments. We understand each other very well.

*The music scenario is changing now and movies are releasing without songs. How do you see it? *

Music has importance world wide. It changes the mood of the people. In foreign countries there are no songs in films. But I personally feel that music should not be separated from the movie as it gives the complete theatrical experience. Songs give a completely different feeling to the audience making them all the more engaged with the film. I enjoy movies without songs, but I still prefer films with songs as they bring more energy and connectivity.

*Earlier songs were differentiated based on the language. This seems to have changed now?*

Someone has said that music has no language. To be true music has no language, but the lyrics make it attached to a particular place. Since we have many languages in our country, it becomes difficult to reach the audience. I take it up as a challenge to ensure that people from other states also enjoy the songs that I make.

*Is DSP a music director or composer?*

I am a music lover. I always love to compose my songs and score BGM. In many scenes I use the songs for some RR. I am a devotee of maestro Ilayaraja. He is like a god to me and changed how BGM was made for a movie. I would always prefer making BGMs over songs.

*Are pan-Indian films fashion or passion?*

We come to this field to get name and fame. There should be no regional restriction for that. Hindi movies are not called pan-Indian as they are accepted naturally. Regional cinemas are not given that benefit. But recently, films like Baahubali, KGF and Pushpa have changed this. Why should we restrict ourselves to one region? The word pan-India will soon vanish and it will all become Indian film and later change to world cinema.

As my target was only to be a musician, I refused a few acting offers initially. But the pandemic has changed my perception. It got me thinking and I wanted to try everything that I am good at. So very soon I will make my debut as an actor. Work for that has already begun.