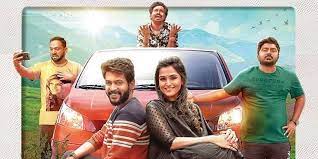 Semma Bothey Aagathey, Badri Venkatesh’s earlier outing was fun filled and enjoyable and he has earnestly tried to recreate the same fun content here and it would be only fair to say that he has succeeded only to some extent.

As in his previous outings, Rio Raj carries his character quite effortlessly and it is fun to watch him act funny!

Ramya Nambeesan does well but does she not look a bit elderly to pair up with Rio Raj?

Bala Saravanan is a bit too loud as ever but still tickles our funny bones by some fun filled one-liners time and again!

Robo Shankar and Munishkanth are both less impressive.

Aadukalam Naren‘s cameo as the heroine’s dad is convincing.

Siddharth Vipin, the actor was once a composer, it is recollected!

Bala Saravanan’s sister elopes with her lover and he sets out on a journey with some friends in search of her while forcing his sister’s friend to accompany them as he is allegedly involved in the act of elopement!

The climax sequences could have been thought out and executed better.

A time pass, without much of a fuss!