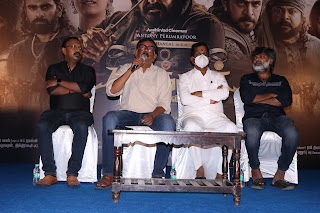 Way back in the year 1996, Priyadarshan and Mohanlal collaborated for a magnum opus titled Kaalapaani which was eventually the first Malayalam film for Prabhu. It was released by none other than Kalaipuli S.Thanu.

Now, Priyadarshan and Mohanlal have collaborated for this flick yet another blockbuster the Tamil version of which has been released by Kalaipuli S.Thanu, after such a long time!

Priyadarshan confided that the moment the project was launched and it was decided to do a Tamil version too, Mohanlal immediately told me that he definitely wanted Prabhu on board and asked me to create a character for him in the film!

The film’s screenplay is a blend of facts and fiction and we have added certain characters and character-based incidents to add pep to the proceedings.

CG work has played a very pivotal role in the proceedings and the credit goes to Priyadarshan’s son for his excellent contributions.

Priyadarshan’s daughter too has played a cameo character in the film and pairing up with her is Pranav Mohanlal who plays the younger version of the protagonist.

The film’s dialogue has been penned by RP Bala who had penned the Tamil dialogue for Mohanlal’s earlier outings in Tamil such as Puli Murugan and Lucifer.

Out of 639 theatres in Kerala, the film has been released in 632 theatres and has touched the 100 crore mark in reservations alone!

If Priyadarshan plans a direct Tamil venture, Kalaipuli S.Thanu will produce it, it was said!