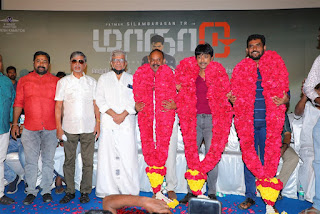 Without any ambiguity or doubt, Maanaaadu bankrolled by Suresh Kamatchi and directed by Venkat Prabhu can be hailed as one of the biggest hits of 2021 despite the fact that the film faced several teething problems right from the moment it was launched!

It was announced some years ago prior to the start of the pandemic and it was subsequently dropped for classified reasons!

As a matter of fact, Silambarasan who was signed in to play the lead exit the project and even announced that another project with a similar sounding title will happen!

But after all the confusion that had set, the pandemic set in initiating closure of everything!

But as luck would have it, the project got revived and the shooting started taking place as scheduled subsequently!

Not that all well on well but all the teething problems were overcome and the schedules were held as planned and were duly executed without any issues.

Silambarasan has been receiving encomiums from all quarters for his comeback spree!

Equally so, S.J.Suryah, the director turned actor too won praises for his riveting performance as a cop with shades!

Yuvan Shankar Raja’s music too was a major contributing factor for the film’s stunning success!

Producer Suresh Kamatchi mentioned about the ordeals he was forced to face during the making of the movie.

Venkat Prabhu hailed the cooperation of the entire cast and crew for their contributions which paved way for the film’s success!

S.A.Chandrasekaran and Rajan too spoke on the occasion.