Director Vasantha Balan who had commenced his film career with Album (2002) which was bankrolled by his mentor, K.Balachandar through his home banner, Kavithalaya Productions, has staged a comeback by this gripping tale of human emotions set against the backdrop of an ever-eventful slum.

G.V.Prakash Kumar has floated through the character Karna who is a quick-witted, ever helpful youth spending time mostly in the company of his friend, Rocky (Nandan Ram, son of composer, Sirpi). They both involve themselves in petty thefts time and again and are well acquainted with the local Inspector, Muruga Perumal (Ravi Maria).

Pappammal (Radhika Sarath Kumar) is Karna’s affectionate mother who keeps pleading with her son to mend his ways but her words fall on deaf ears!

A chance encounter with a couple of thugs cause trouble for them all and Rocky gets killed. 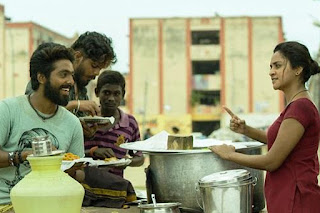 ) a young but daring girl enters that neighborhood and is constantly wooed by Karna and not before long they turn lovers!

But fate has something else in store for Karna who gets shot by the Inspector in a coldblooded manner!

The lead pair has done their roles with understanding.

Nandam Ram is impressive as Rocky.

G.V.Prakash Kumar has scored the music too.

P.T.Selva Kumar cuts a neat cameo as a social activist.