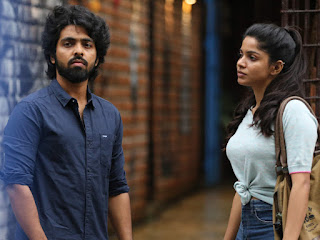 Written and Wielded by –Sathish Selvakumar

There is a general feeling that most of G.V.Prakash Kumar’s films showcase adult themes which would render it a difficult proposition for those who venture out to theatres to watch movie with their families!

Well, here is a flick that proves that beyond any doubt with a theme that is both bold and beautiful!

Interestingly, Darling was the title of one of his earlier films and it is more of a coincidence that he is called Darling the film’s protagonist!

He has no airs around him as well as no strings attached when it comes to emotions, sentiments and upkeep of values and traditions!

He lives for himself, lives the moment and cares scantily for the feelings of others; more so, he seldom cares for the feelings of those around him and additionally doesn’t give a damn as to how others view him from their perspective! What others think of him is no concern of his is his lifestyle!

Enters Subbu (Divya Bharathi) who is befriended by him and on expected lines they go in for a live-in relationship.

All hell breaks loose when she wants to retain her pregnancy while he doesn’t want it that way!
Heartburns follow and what not!

Strictly for those who look at life this way-Come easy, go easy!