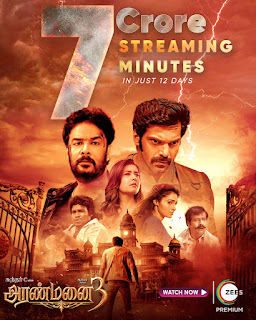 'Aranmanai 3' starring Arya, Raashi Khanna, Vivekh and Yogi Babu from Director Sundar C had its OTT release recently on ZEE5. After a successful run in theaters, 'Aranmanai 3' has now surpassed 7 Crore streaming Minutes in 12 days, much to the delight of the film crew and ZEE5 Team.

ZEE5 has been consistently entertaining fans with back-to-back, top-notch quality content which includes 'Malaysia to Amnesia', 'Dikkiloona' and ‘Vinodhaya Sitham’. Now 'Aranmanai 3' has joined the list

With more such valuable entertainment on the pipeline, ZEE5 has all the elements to continuously delight its subscribers in coming months