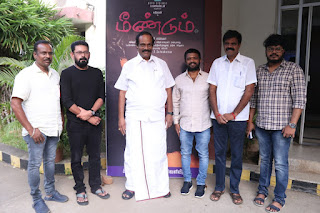 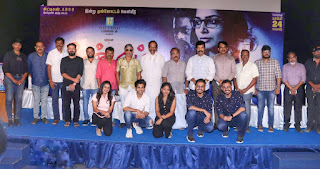 Remember Shravana Subbiah who made Citizen with Ajith...

That flick was a super hit but not his next outing ABCD!

He is now back with a big bang with Meendum bankrolled by Hero Cinemas.

Stalwarts as Nanjil Sampath, Dindugal Leoni, S.A.Chandrasekaran, Ravi Maria and Rangaraj Pandey graced the occasion by their presence while making their presence felt with their speeches which reflected their presence of mind!

The cast and crew of the film were also present on the occasion.

Kadiravan, the film’s lead man had stretched himself beyond the limits of endurance while taking part in the action sequences as evidenced by the film’s Trailer. Anaka who had acted in Natpe Thunai and Dikkilona plays his pair.

The film also lays focus on the sufferings of fishermen who are caught by the Navy.

It also speaks about the indirect war launched by China, Pakistan and Sri Lanka on India.

The songs tuned in by Naren Balakumaran were truly pleasant to hear and the film’s music too was formally launched on the occasion.

The main plot deals with human emotions in the backdrop set against the life of a couple!

The film’s action sequences have been choreographed breathtakingly as seen in the film’s Trailer.

It is worth noting that the protagonist is tied up nude at an enemy’s camp and those portions with stun the viewers!