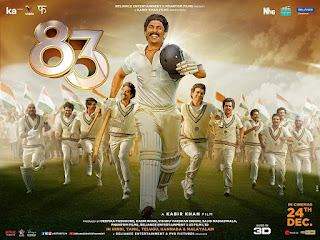 Jointly produced by a couple of big banners, this sports drama directed by Kabir Khan is a pleasant walk down the memory lane that has reconstructed the memorable moments of our country claiming the World Cup in cricket on the merit of the meritorious performance of Kapil Dev and Team!

Ranveer Singh is a perfect choice to play Kapil and it is quite evident that he has done enough of spade work to do things the Kapil way! Stunning performance!

Deepika Padukone proves a fine match to her match-master husband while enacting the role of Romi Bhatia.

Needless to mention, Kabir Khan has done extensive research while recreating the happenings of the World Cup!

Kapil Dev’s contribution to the team’s victory has been duly highlighted in the film, especially his knock of an unbeaten 175!

The screenplay has also brought out the undercurrent aspects that prevailed then and finally how the entire team levelled up as a single segment to fight fiercely and win the Cup while the whole world stood watching!

The others in the cast have also executed themselves admirably well!

The film sparkles and sizzles with the golden memories of that year of 1983 which stands imprinted in history forever!

Certain amount of dramatization needs to find a place in such films and Kabir Khan has balanced it all so well without exactly overdoing it or underplaying it!

The cricket portions shot are of high standards with utmost authenticity!

Miss not the action on the field of cricket!

Sports Journalists would love to lap up this riveting sports drama!