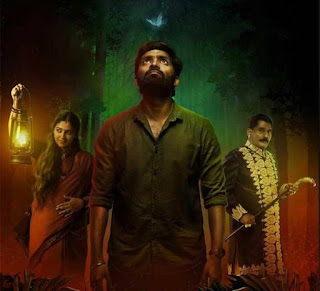 Blending facts with fiction and presenting a gripping tale filled with emotions and action seems to have become the trend of the times and the young filmmaker, Srikantan Anand whose has kept a tight leash over the screenplay and direction from start to finish!

Vikram Mohan’s breathtaking cinematography has brought out the alluring beauty of the Western Ghats in a very impressive manner.

The score of Ron Ethan Yohann is an asset to the film, especially his background music.

The director has also made a loud statement about reincarnation and has solicited the presence a long mirror to depict the same.

Interestingly, the mirror image has been linked to reincarnation and the film’s suspense element has been well maintained while unfolding the facts behind who’s who!

Vetri has carried his character in a subtle but effective manner.

Smruthi Venkat as the documentary filmmaker is apt for the part.

Azhagam Perumal’s characterization is the surprise package of the film!

Vela Ramamoorthy has asserted his class in a dominant role.

The film makes the proceedings an interesting watch!