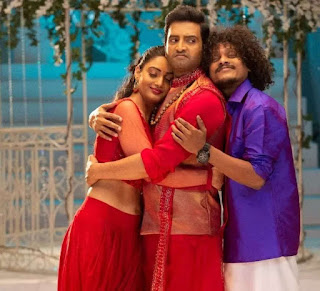 Ever since he turned a hero after his successful romance with humour- oriented roles for long, Santhanam has been mostly choosing scripts which would showcase him in a typical character of a glib-tongued youth always pulling the legs of the person standing opposite in addition to delivering quick-witted one-liners!

For a change, he has donned the role of a youngster who stammers while speaking making him a laughing stock most of the time!

He also finds it difficult to get proper employment as his setback always comes in the way!

He holds the torch for a girl (Preethi Verma) of the neighbourhood but his present plight of remaining an unemployed youth his plan to marry her remains as a distant dream!

Either luckily or unluckily, he gains access to a suitcase stuffed with money that belongs to a corrupt politician.

Obviously, with such a premise, one can be sure of what to expect and on expected lines, the screenplay toes on the expected track!

How things get sorted out is the somewhat interesting rest!

No doubt, there are quite a number of fun filled moments which would satisfy his fans and followers...

Sam C.S.’s music is reflective of the film’s mood.