RETURNING TO THE ROOTS! 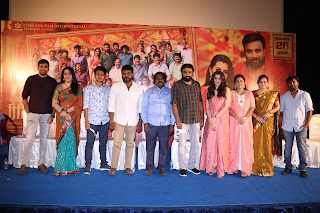 Produced by Chendur Films International, the film has its screenplay set around a huge family, taking family values to its roots! Radha Ravi, Thambi Ramiah, Vijayakumar, Sathish, Manobala, Rajkapoor, Rekha, Yogibabu and many others are in the cast.

Sasikumar was all praise for the young director.

Many of those from the cast and crew who spoke on the occasion mentioned that Kadirvelu has the trappings of his mentor as far as handling a big cast but yet managing to provide scope for all to make their presence felt!

The songs screened on the occasion proved the prowess of Sam C.S., the scorer.

The director lauded the cooperation of the cast and crew given the fact that the total number of artistes in the film touched a tally of almost 50!

From the Trailer screened, it was quite obvious that the film would stand out as a family entertainer!