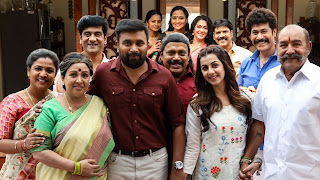 The director has given the screenplay an urban flavor too especially against the I.T. backdrop with the film’s protagonist as a qualified professional employed in a leading I.T firm.

It is but a challenge to mount sequences with a busload of familiar artistes- all in a single frame and the filmmaker deserves to be applauded for that effort!

Radharavi asserts his class as the neighbor of that family waiting in the wings to get his daughter married to the protagonist.

Besides melodrama, the film has some action blocks too and the climax fight warrants mention.

The real identity of Nikki Gilrani as let out towards the latter half of the film is really a good suspense element.