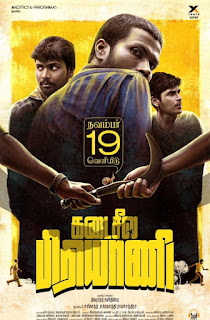 This well crafted thriller with some excellent visuals and creditworthy directorial flashes may lack the commercial ingredients that usually accompany such films built upon such unusual premise but it makes viewing interesting with several unexpected twists and turns at every turn as the narration unfolds!

The climax sequence is a surprise and it is actually a bolt from the blue as to how the film’s antagonist meets up with his end, unexpected for both-the audience as well as that character!

The film boasts of very natural portrayals from the principal cast with no undue importance given to any character! As a matter of fact, the actors, virtually unknown, blend with the characters so well that it appears as though we watch a real life happening and not a film on the reels!

The extent to which an antagonist, who is a psychopath, would travel under trying and challenging circumstances has been very effectively and efficiently portrayed on the screen brilliantly and in a breathtaking manner by the director. Hakim Shahjahan is just too good for words in that role!

The theme is set around three brothers all of whom set out to avenge the murder of their father by a bigwig and they almost accomplish that objective but what comes in as a surprise package comes in the form of the bigwig’s psycho son who is too powerful for the three of them!

Vijay Sethupathi who set the ball rolling at the start by playing the role of a narrator makes a surprise appearance at the end and also pulls a fast one to give a twist to the interesting tale!