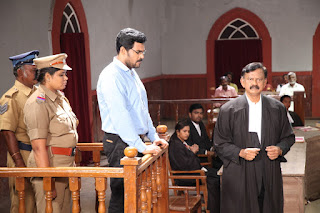 A sensitive theme that deliberates on a social issue that has significant relevance to the routine life of the common man pertaining to the acceptability of currency notes, distorted by writing on it which was dispensed by an ATM. This is the basic format of the plot of this flick which takes a realistic look at the situation putting forth a lot of arguments in that connect relevant to the issuance of currency notes by ATMs.

In the bargain, the director has questioned several aspects pertaining to the laws brought in by the Central Government evaluating the pros and cons at the backdrop of a courtroom battle.

Of course, the filmmaker has taken some cinematic liberties while unfolding some situations which appear a bit contrived, pointing out accusing fingers on some aspects pertaining to certain stands taken by the Government of India (referred in the film as Ondriya Arasu!). For, instance, demonetisation is also referred to!

The appreciable feature of the courtroom battle is that it centres round the aspects concerning the dispensing of cash through ATMs most of which are managed by private players and not by the Banks concerned!

The cast of the film is mostly new and could have been guided better by the maker as far as the aspect of execution of performances!