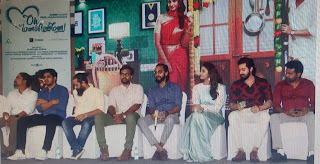 The cast and crew of Oh Manapenne met the members of the Media recently and it proved to be a very lively interaction, so to say!

The film is showcased on Disney Plus Hotstar OTT Platform with Harish Kalyan and Priya Bhavani Shankar in the lead. The Tollywood hit, Pelli Choopulu (2016) has also been remade in Malayalam and Hindi.  Vijay Deverakonda and Ritu Varma played the lead roles in that film which bagged 2 National Awards!

The film has now been remade in Tamil.

Karthik Sundar, an erstwhile deputy of A.L.Vijay has directed this flick which was wrapped up over a single schedule!

The film’s songs proved the talent of Vishal Chandrasekar.

The film’s technical team as well as those in the main cast threw light on the efforts that were invested in the making of the film!

A full-fledged entertainer with all enjoyable elements to make it watch worthy, it was inferred!