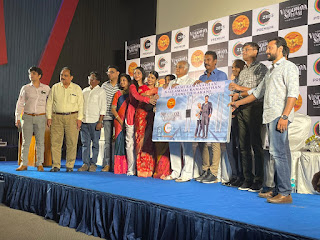 He has always been a trend setter while it came to innovations with respect to the theatre industry and has time and again proved a path-breaker whenever there was a scope to launch newer designs and methodologies!

He was a pioneer in blending a Mall to a theatre complex and bringing up new facilities there, thereby exploring new avenues and vistas to entertain people who walk in!

His latest outing is a film venture –Vinodhaya Sitham- a brilliant film streaming on the Zee 5 platform!

Scripted and helmed by Samudrakani, the film is indeed an innovation of sorts that sketches the plight and predicament of a man whose life span gets extended by 3 months, the courtesy offered by time, soon after he gets victimised in an accident!

The pre-release event brought up Sri. Abhirami Ramanathan, his better half, Mrs. Nallamai Ramanathan, Dr. P.Srinivasan, CEO of the group and who’s who on the Zee 5 platform!

The main cast and crew of the film headlined by Samudrakani streaming on the OTT Platform was also present during the Session of Media Interaction.