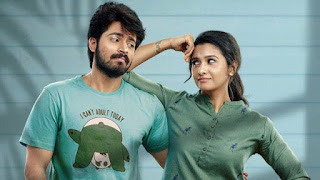 From the perspective of parents, especially fathers (of both sons and daughters), their off springs should primarily get professionally educated, get a professional job and settle down with the most perfect match (of their choice!). Fair enough!

But the sons and daughters of the contemporary generation never ever toe this line and that is exactly is the reason for disagreement between both sides! Also, the present day youth prefer to pursue their passion with respect to choosing a profession to eke out a living! Fair enough, again!

With this as the crux of the plot came in Pelli Choppulu in 2016 which won National recognition under 2 categories!

Newcomer Karthikk Sundar has remade the Telugu film with suitable changes to suit the tastes of the Kollywood audience but it is only fair to say that he has been successful only to a reasonable extent as the screenplay looks lacklustre owing to its predictability! Harish and Priya form a fine combo and it is a delight to watch them as a pair. Vishal Chandrasekar’s compositions deserve credit. Art direction too calls for mention.

The concept of Food Truck has been conceived and crafted quite well.

Good enough but could have been better...