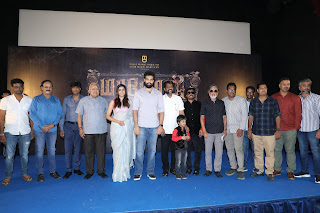 Double Meaning Productions Arun Mozhi Manickam has been carving a niche of excellence for his production of movies in the Tamil movie industry. The producer, who has embarked on a new avatar as a screenwriter with Sibiraj starrer Maayon has now made an incredible achievement as a pioneer in the pages of the Indian film fraternity. The teaser of this film has been packaged with an audio description exclusively for visually challenged individuals. The event happened this morning herein Chennai, with the presence of eminent personalities of Tamil domain like director SA Chandrashekar, Nakkeeran Gopal, Datto Radharavi and many other eminent personalities.

Here are some of the excerpts from the occasion…

Nakkheeran Gopal said, “After listening to a great speech like Elango, I felt if I should give any speech. Firstly, I would like to thank producer Arun Mozhi Manickam for this great attempt and I congratulate the cast and crew of this movie as well. Such new attempts brim me with new hopes. I was spellbound watching the efforts of Elango in this movie teaser with Audio Description. I came for this occasion as soon as I got the call from Elango. He is an inspiration to many. When I came across the word ‘Double Meaning’ in the production house name, I got it associated with double entendre, but their vision is phenomenal. I thank producer Arun Mozhi Manickam for giving Elango the space and time to express his thoughts and feelings.”

Actor Datto Radharavi said, “Sathyaraj and myself are like brothers and Sibiraj is more like my son-in-law. When I was affected by Corona, it was Sathyaraj, who first gave me a call and enquired about my health condition. I am so glad to be working with Sibiraj in this movie. He is so identical to his father for the discipline and punctuality factors. He maintains a cordial and congenial relationship with everyone in the team. Directors have now become actors and it’s very much evident with SAC and KS Ravikumar. They have done a good job with the performances.  Cinematographer Ram Prasad has done a fabulous job with his camera works. Art director Balasubramaniam has done a decorous job with his art department works. Producer Arun Mozhi Manickam has never been to the spots and gave us complete freedom It’s great to see a teaser exclusively released for the visually challenged people, and I express my heartiest thanks to the entire team. I was enthralled with the earnest dedication and works of Elango, and made him the member of dubbing union. This will be a different film in the career of Sibiraj till the date.”

Producer G Dhananjayan said, “This is a very good and pleasant morning. The speech of Elango was amazing and he has captured us completely with it. Producer Arun Mozhi Manickam has become a screenwriter with this movie. Jayashree, head of visually challenged group has been doing lots of achievements, and I congratulate her for this gesture. A producer should always come up with fresh and new ideas. In this aspect, Arun Mozhi Manickam has done a fabulous job of having an audio description for the teaser of Maayon. Earlier, I had screened ‘Thaandavam’ for the visually challenged people, which was an exclusive screening. I request Arun Mozhi Manickam to do the same with this movie Maayon as well. Sibiraj has done a remarkable job with his performance in this movie. Kishore has come up with a brilliant directorial proficiency with this movie. I wish all the best for the entire cast and crew of Maayon for the grand success of this movie.”

Jayashree, Chairman, Disability Organization said, “I am overwhelmingly happy with the way Maayon team has entertained the visually challenged group. This is a pioneer attempt and I am sure that many will be following the same. I request the other producers and directors of movies to come up with the same idea and make it available for people with special needs..”


Director S A Chandrashekhar said, “I was astonished watching the teaser of this movie, and the success is already written all over it. Arun Mozhi Manickam has done a fabulous job and I congratulate him for this. This is a good beginning. I am so glad and emotional listening to the speech of Elango. He told that he is my fan and now I am his fan. The entire crew of Maayon has done a hard work and it is evident with the teaser. I wish the entire team for a grand success.”


Actress Tanya Ravichandran said, “This is indeed a great project for me and I thank Arun Mozhi Manickam sir for having me as a part of this project. It was great working with Sibiraj and KS Ravikumar sir. Maayon will endow audiences with a fresh and different experience in the theaters.”

Actor Sibiraj said, “We all get frustrated if we are watching a low resolution video in the television, then guess what would be the bleak scenario for the visually challenged people, where they would have no chance to enjoy the cinematic vision. I am so elated to be a part of this movie Maayon, which has something special for them. I thank producer Arun Mozhi Manickam sir for choosing me to be a part of their project. The entire team owes a lot to Maestro Isaignani Ilaiyaraaja sir for his musical magic in this movie. This is a dream come true moment for me to be a part of a movie that has his musical score. Director Kishore come up with a brilliant story and direction. Ram Prasad has exquisitely brought it in visuals with his cinematography. He is already a well-established and most favourite cinematographer in the Telugu industry. He has shown me nicely in this movie. Tanya is the only person suiting my physical height in this movie. She has done a fabulous work in this movie. It was great working with Radharavi sir, Ravikumar sir. This will be a delightful movie for all the audiences.”


Cinematographer Ram Prasad said, “Many are acclaiming me as a fabulous cinematographer in the Telugu industry, but to be honest, I gained more experience of cinematography from the Tamil movie industry. The vision of Kishore is amazing. Maayon will be a special movie for the audiences. It was great working with the talented actors like Sibiraj and Tanya Ravichandran.”


Producer Arun Mozhi Manickam said, “Maayon is a special movie for our production house of Double Meaning Production. The movie deals with a fresh and unique concept of God Vs Science, which is something new in the Tamil film industry. So we wanted to make sure that the movie offers something fresh and unique in every aspect. Of course, the full-length feature film will be a phenomenal experience for its spellbinding visuals, a unique story premise with promising performances by Sibiraj and others with Maestro Isaignani Ilaiyaraaja’s musical score as the icing on the cake. With the teaser, we wanted to attempt something different and that’s when the idea about the audio description for the visually challenged popped up. Precisely, the idea about Audio Description happened when we screened our previous movie Psycho with Audio Description for the visually challenged people. They were really happy about our efforts and we in turn were exhilarated watching their enjoyable experience. They all requested us to screen our forthcoming movies with audio description on first day itself.  We wanted to see them excited even before viewing the full-length feature film, and henceforth came up with the idea of materializing it with the Maayon teaser itself. Besides, we are also planning to host a contest of getting the fervent film buffs involved by letting them give audio descriptions for the teaser, and the selected winner will be offered an opportunity to perform AD for the trailer. We have few more surprises of the same paradigm for the full-length theatrical version as well.”


Sibiraj is playing the lead role in Maayon and Tanya Ravichandran is his love interest. The movie is directed by Kishore N and is produced by Arun Mozhi Manickam of Double Meaning Production. Ram Prasad is handling cinematography and Isaignani Ilaiyaraaja is composing music. The others in the star cast include K.S. Ravikumar, Radha Ravi, Bucks, Hareesh Peradi, and few more prominent actors.