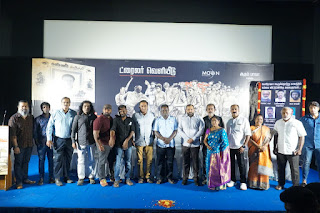 From the capacity of a film critic in a You Tube Channel, Maaran, known more popularly as Blue Sattai Maaran (as he used to wear mostly Blue Shirts!), he has now turned a filmmaker and is all set to come a circle in that connect!

Titled Anti-Indian, his debut film has already weathered several tough storms while the film was submitted for Certification at CBFC and finally, following a long drawn battle, the film is ready for theatrical release and its Trailer was released recently at a Media Meet with the auditorium bursting at its seams as it was thickly populated with people who were associated with the making of the film besides the Media fraternity!

The Trailer was clear enough to prove that the film is a bold venture that takes a direct dig at the powers that be, also deliberating on the excesses of those hailing from the 3 dominating religions in the country!

In his address, Maaran spoke about the film’s adventurous journey that has gone through troubled times since the moment the project was flagged off till the moment the film managed to be certified!

The most evident factor of the film is the guts with which he had made the movie despite several odds, fully aware of the fact that objections will be raised from several quarters of the society besides garnering displeasure from political outfits!

Maaran certainly deserves a pat on his back for his boldness to take up a theme that would create a big flutter in filmy circles besides paving way for controversies!

In spite of knowing fully what to expect, he has performed his journey quite daringly in a dashing manner as evidenced by the Trailer which eventually offered an insight as to what possibly could be expected of the film, content as well as presentation-wise!

Hats off to him for his willingness to take up and complete such a project and no less important is the role played in getting this fructified is the effort of Aadham Bava, the producer!