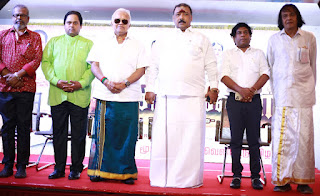 Pasumpon Muthuramalinga Devar was indeed a National Leader who championed several social causes! He not only fought for the rights and betterment of his community but also for the downtrodden and socially backward folks!

Coinciding with the 114th Anniversary of that great leader, the Trailer of the film was released at an exclusive Media-Meet organised by the makers on the 30th of October, 2021!

J. M. Basheer plays the title role of the film scripted and directed by R.Arvindaraj of Oomai Vizhigal fame.

Radhika was one of the special invitees who spoke elaborately on the life and times of the great leader!

The Trailer was one of a kind and the title song is certain to be a hit!
All those who spoke on the film showered heaps of praises on the great leader!

Scheduled for release on Pongal Day, 2022!