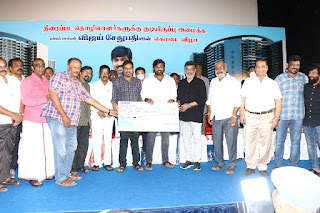 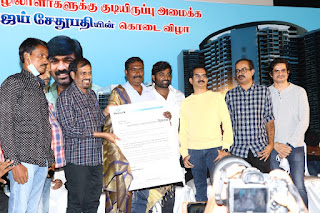 Many actors who start from scratch undergo a change in attitude after tasting success; but there are always exceptions and a few of them remain the same regardless of the heights they reach in both status and stature!

Vijay Sethupathi is one actor belonging to the second category who has managed to remain grounded unmindful of the herculean heights that he has reached in his career! Acted alongside Rajnikanth, Vijay and now acting with Kamal Hassan!  He has already set his foot at Bollywood too!

One exceptional actor who hasn’t yet let himself to be trapped under the image-trap! On a rough estimate he is the only actor at Kollywood with the maximum number of films on hand!

Under the auspices of R.K.Selvamani known for his blockbuster films in the past, Vijay Sethupathi has contributed a sum of Rs. 1 crore in connection with the huge, multi-crore housing project initiated by FEFSI. The actor who stood humility-personified at a function held recently promised to contribute more too towards the said cause!

In his address, he mentioned that he is always conscious of his early days when he was struggling to find a break in the film industry with huge financial liabilities to meet with!

He also remarked about the struggle people undergo while hunting for houses for tenancy!

In a lighter vein, he also mentioned about the conditions house-owners used to impose while letting out their properties on rent!

Kalaipuli S. Thanu too was present on the occasion during which time all the associations related to the film employees unions felicitated Vijay Sethupathi while expressing their heartfelt thanks for his laudable gesture!

A true crusader of worthwhile causes!