VAIGAIPUYAL IS BACK WITH A BANG! 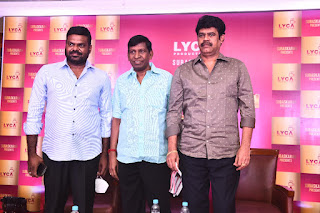 Vadivelu who was not visible on the silver screen for quite some time now is back with a big bang in a project bankrolled by Lyca Productions with Suraj at the helm, wielding the megaphone!

‘I shall continue to entertain and enthral the audience by providing comedy content continuously through my films!’  -proclaimed actor Vadivelu who has made a comeback of sorts!

‘I want to keep the audience in splits through my humour till my last breath!’ he added further.

He also expressed regret for having lost his good friend, Vivekh whom he holds in high esteem!

It is worth noting that both have done films together!

He even narrated a story...

A man went to the Doctor and requested him to treat him for depression. The Doctor asked him to come after a couple of days but the man insisted that the Doctor attends on him immediately! The Doctor said, I have 2 tickets for a Circus nearby. My wife and I were planning to go but instead of my wife, you can join me as the Clown’s performance will rid you of all your problems!

The man said, I am that Clown!

‘I was been off the industry for about 4 years and it was both problematic as well as painful! Thanks to the efforts of Sri. Subaskaran that all issues have been sorted out amicably and I am back on the acting arena! I am grateful to Thamizhkumaran of Lyca who has been instrumental for all these happenings.’

He also mentioned about the problems faced by the people during Corona.

While avoiding sensitive questions posed by the Media, he sang a song, delivered his brand of punch dialogue and made the event lively!

He also thanked the present Government for the good work being taken up, also mentioning about the good work of the Producers’ Council.