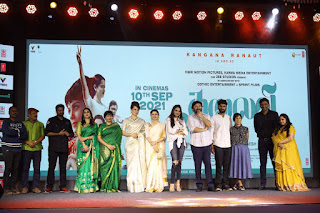 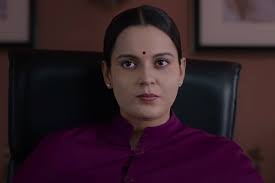 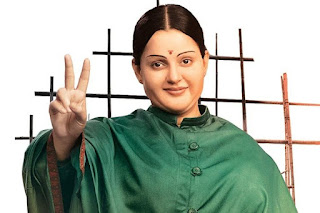 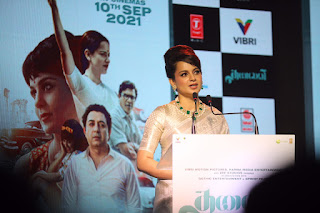 One of the much awaited movies of the season especially after the opening up of Theatres is Thalaivaii , a biopic of the late, Legendary Actress turned Chief Minister of the State of Tamilnadu, Puratchi Thalaivi, J. Jayalalitha, affectionately hailed by all as Amma.

Beginning with filmmaker,A. L. Vijay who has directed the film, the cast headed by Kangana Ranaut, Bhagyashree, Madhubala, Arvindswamy, Thambi Ramiah etc were present on the occasion.

In her address, Madhubala recollected her journey with films starting with Azhagan then moving on to Roja making a special mention about co- star in that, Arvindswamy.

Bhagyashree was all praise for the director for having cast her in a crucial role in the film.

Thambi Ramiah made use of the opportunity to thank our C. M. for the welfare measures undertaken by his Government while placing a request to the C. M. to ensure that theatres thrive and not shut down or get converted into marriage halls!

Kangana Ranaut showered heaps of praises on the entire team. She also mentioned that she was glad to have depicted the legendary actress turned politician who weathered several tough storms to reach the top!

Director Vijay attributed the outcome of the production to the entire cast & crew.

The film is scheduled for theatrical release on September 10th 2021 in Tamil, Telugu & Hindi.