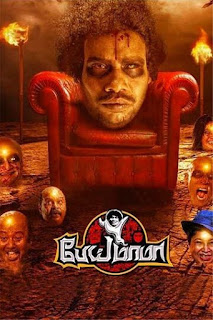 Yogi Babu takes on the baton of the protagonist in full form getting a Rajnikanth (as in Petta) kind of introduction in this horror comedy that has enough cast members to keep the audience hooked to their seats firmly.

The screenplay has been set around a bungalow set in a hill station, supposedly haunted by ghosts and the protagonist’s (Yogi Babu) family all of whom are partners in crime land there in style to drive away the ghosts and in the bargain they pave way for some horrific moments that are punctuated by some well timed comic sequences.

Yogi Babu emerges triumphant in a pivotal role stealing the frames by his dialogue delivery and body language keeping the viewers in splits most of the time ably supported by the supporting cast that render valuable support to sustain the smoothness of the script!

The apt score of Raj Aryan helps to maintain the tempo till the end.

The seasoned filmmaker that he is, Sakshi Chidambaram has spared no effort to mix and merge the necessary masala ingredients to keep the viewers engrossed right from the moment go till the closing frames!

All the same, a good entertainer all the way!