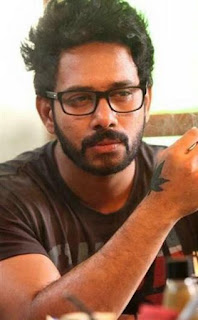 A well conceived and crafted thriller the plot revolving around marital discord owing to delicate reasons the consequences of which are absolutely  unexpected and undesirable!

Bharath’s talent to shake a leg is too well known; likewise, his acting prowess too needs no introduction as there are too many movies to quote as reference to prove his credentials.

He scores brilliantly in the role of a committed businessman Karthik who is deeply attached to his cute looking daughter but is always in short of time to devote to his wife, Madhu (Aparna Vinod) who is employed as a teacher at the same school where their dear daughter, Kavi (Aaradhya Sri) is studying.

The relationship between Karthik and Madhu takes a dip as both have their own and varying viewpoints-Karthik is of opinion that he is doing his best for the family while Madhu doesn’t subscribe to his view on the same subject matter but contrastingly opines that he is wedded more intimately to his work than to his family especially to his wife!

Shiva (Gokul Anand) is Karthik’s business partner who is a full time alcoholic who spares very little time to business!

Guru (Aruvi Bala), a distant relative arrives at that household and to take up a job at Karthik’s tea factory.

Guru is befriended by some co-workers in the factory and they spend time together whenever time permits.

Guru accidentally happens to access some secret concerning Karthik’s household in which Shiva too is involved.

How things reach a crescendo in the climax is the thrilling rest.

Bharath has done a fabulous job spelling out a though provoking dialogue-What appears to be right in a situation may appear to be totally wrong under a different situation!

Yogi Jaypee enters latter in the narration as a cop but fails to create a flutter!

Gokul Anand is impressive as a man with shades of grey.

Aparna Vinod appears to lack in that oomph factor that is necessary for her character in the film.

Yuva’s camera has captured the scenic locales of the lovely hill station.