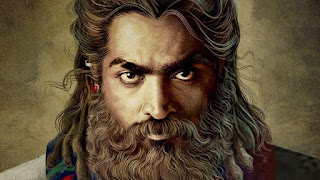 SP Jhanathan who passed away recently was a versatile filmmaker who dealt with strong scripts with a serious outlook to ring in changes in the society!

This last film of his deliberates on the definition of the word PROFIT interpreting it in a manner that unfolds from the perspective of those who stand and serve as the roots for all trading activities.

The theme talks about mass-agriculture on a cooperative and consolidated basis which will eventually let the root level farmers to benefit more out of their trading transactions while ensuring that the middle men and business bigwigs do not exploit and cheat them of their hard work and labour!

Vijay Sethupathi as Pakkiri plays a crusader championing the cause of the innocent farmers and agriculturists who are usually taken for a ride by those who squeeze them dry by taking advantage of them!

The versatile actor asserts himself well in an author backed role in his own inimitable style!

Shruthi Haasan playing the heroine has not much of a scope but unintentionally provides humour content!
it is saddening to see Sai Dhanshika being reduced to a henchwoman of the villain (Jagapathi Babu) who fails to create a flutter!