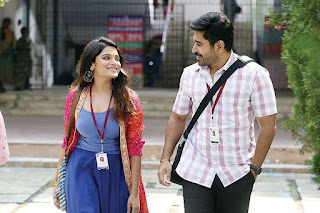 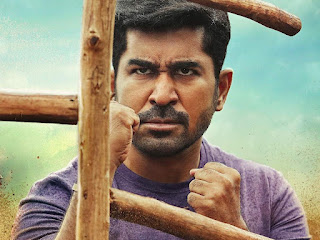 Vijay Anthony moves to the next higher plane as an action hero in this action packed flick that also showcases mother sentiment!

His soft spoken nature and his aggression when pushed to a corner are exhibited from a new dimension in this entertainer that has a bit of a romantic angle too with Aathmika providing the oomph factor but to the required levels.

He plays Vijayaraghavan an IAS aspirant who is deeply attached to him mother. His mother’s present predicament pushes him to do the best and he also is desirous of helping slum kids to acquire education.

The bunch of baddies appears as caricatures with creating much of an impact expecting for raising voices and giving directives to henchmen!

Vijayaraghavan who lives in a slum apartment helps the local students to better their education much to the irritation of the local thugs who hold a different agenda for those growing kids!

When he rubs them on the wrong side he retaliates and they in turn bash him up!

An average minded person would have moved away but the protagonist is made of sterner stuff and hence contests in the elections for Ward Councillors and later for higher rungs!

How he accomplishes his mission is the rest that is moderately interesting.

Nivas K.Prasanna’s music is a fine point of the film.