The cast & crew of the forthcoming flick, Kodiyil Oruvan scheduled for release on September 17th 2021, met the members of the Press and the outcome was a lively interaction!

T.Siva of Amma Creations hailed Vijay Sethupathi as Vijayakanth of the contemporary times who promotes new talents as filmmakers, just like Vijayakanth. He further said that Vijay Anthony was paved the way for actors to reduce their remuneration in favour of the producers during the peak of the pandemic!

Producer TD Rhaja, Chendur Films, said When Ananda Krishna narrated me the script, I felt that it has something unique. Apparently, such scripts would actually demand nearly 100-120 days of shooting. To my surprise, the director managed to wrap up the shoot by 75 days. Music Director Nivas K Prasanna is a big talented personality, and he has delivered a fabulous work for this movie. Vijay Antony is a real life hero. During the pandemic times, he came forward reducing a percentage of his remuneration for the well being of producers. I am happy that he is embarking on his directorial journey with the movie Pichaikaran 2. I wish him all the best. Aatmika is the best heroine I have worked till the date. She has been a great support to the movie."

In his speech, Producer G Dhananjayan, Infiniti Film Ventures, said, "I still remember the day when Vijay Antony revealed me the premise of Kodiyil Oruvan, and it instantly instilled in me the confidence to be involved in this project. Director Ananda Krishna is a proficient filmmaker, who is an expert over perfect planning that makes him the producer friendly. Vijay Antony is officially launching himself as Editor. I told him that he is now eligible to become a filmmaker and it has finally happened. Aatmika is not just a talented artiste, but a great human for she has been actively involved in the promotional events. This movie has a responsible content and will be liked by all!

NS Uday Kumar, the cameraman of the film, said, "We constantly kept searching a live location for the movie. Director Anand Krishna strained a lot by staying in the neighborhood of Kannagi Nagar to get the locations locked. We have tried our best and hope audiences will notice and appreciate us."

Art Director Papa Nadu Udhay Kumar said, "When producer approached me with the script, it was evident that it would demand a grand scale, but myself and my team managed to get it done at limited budget." 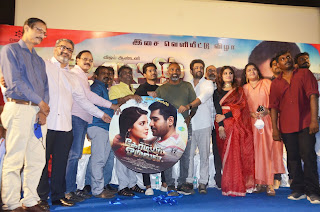