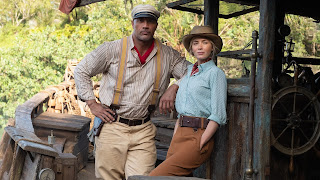 Jungle adventures are aplenty at Hollywood when compared with films made here at Kollywood in that genre.

With the film’s title based on an amusement outlet at Disneyland, this fantasy filled jungle adventure is rich in visuals and special effects as the films moves at a rapid pace right from the start till the very end that is packed with thrills!

Dwayne Johnson, the Rock has a reputation to rock in such characters and he has proclaimed his prowess to shine in such a premise yet again!

Though Emily Blunt’s glam quotient is blunt, she proves her potential in the acting department quite admirably!

The theme is about the adventurous journey of a capable Captain whose sets his boat afloat amidst the thick of a jungle to cruise through tough terrains so as to facilitate a scientist Dr. Lily Houghton (Emily Blunt) and her brother MacGregor Houghton (Jack Whitehall) who have set out a journey in search of the Tree of Life!
The film is abundant in graphics with animals, reptiles and insects scaring out the lead cast, at times the viewers too!

The screenplay showcases a historic twist too as evidenced in the opening sequences with history revisiting itself yet again in the latter half!

A colorful flick that is rich in fun, frolic and fantasy further spruced up by some breathtaking action!