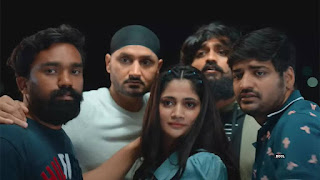 Arjun steals the show both in the opening and closing scenes flexing his feet in some well choreographed action sequences besides asserting his class in the court room battle in the climax portion.

The theme is set round four friends all of who are specialising in mechanical engineering at the private college. Harbhajan Singh, Sathish and two more.

Enters Anita (Losliya, newcomer) who enters the department of mechanical engineering hitherto regarded as a male’s fortress! Anita teams up with the four boys as the five of them stand out as good friends.

Anita has a past but the screenplay doesn’t explore it much but just tells that she has some health issues from which she gets cured in course of time.

A short while later, she gets raped and murdered in a brutal manner by some powers that be but the blame falls on the four friends!

Arjun, an advocate by profession enters the scene of action, champions the cause of the boys and gets them acquitted.

Harbhajan Singh is to learn the nuances of acting in his next outing.

Losliya appears attractive and does what is expected of her.