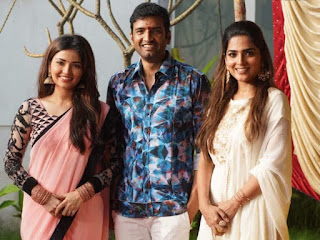 This is out and out a Santhanam film and on expected lines, he steals the frames in his unique and distinctive style, right from the moment go till the closing portions!

This time the premise is different as it is one kind of science-fiction involving a time travel mission.

The two heroines do their parts with élan punctuated by charm and grace!

Arvi’s camera work and Jomin’s editing help sustain the interest of the viewers while watching the proceedings.

Yuvan Shankar Raja’s score is an added attraction to this comedy of errors!

The supporting cast do their best to keep the sequences alive and kicking!