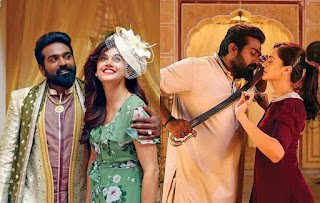 Written and Wielded by –Deepak Sundarrajan

A full length fantasy comedy laced with horror, this is, scripted and helmed by Deepak Sundarrajan who makes his debut as a filmmaker. It is worth noting that he is the son of R.Sundarrajan, a veteran of nearly 4 decades of experience at Kollywood as a director besides being an actor too!

Deepak has taken a light-hearted premise as the plot of his debut vehicle assembling an ensemble cast headed by Vijay Sethupathi and Tapsee in the lead roles.

Jagapathi Babu and Suresh Menon appear in cameo characters but manage to make their presence felt in an effective manner.

Radhika’s versatility is proved yet again in a comical role.

Yogi Babu stands out as a pivot in the proceedings liaising between the other characters most of them appearing as ghosts, the character of Yogi Babu included!

Though he makes a belated entry, Vijay Sethupathi proves a scene-stealer and his onscreen chemistry with Tapsee works out well. Their romantic interludes are a treat to watch.

The scenes have been conceived and crafted well but at times, the execution leaves much to be desired.

The film may appeal to the kids while adults too may enjoy the proceedings.