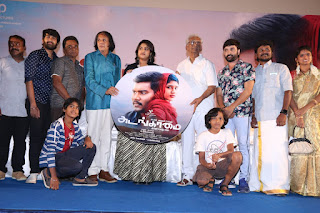 Bankrolled by Vores Pictures, Adangaamai directed by R. Gopal who has assumed responsibility for the story, screenplay and dialogue, the theme of which revolves around a verse from Thirukural!

Saon and Priya are the debutante lead pair while the supporting cast consists of Karthikeyan, Yagavan, Mukilan, Ganesh, Raja etc.

On the occasion of the music release function, the director deliberated on the title which is a verse from Thirukural that finds place in city’s transport buses.

The theme is set around an amicable hero and his 2 adamant friends and the narration showcases the incidents in their lives.

An appeal was placed on the occasion about titles of Tamil films in Tamil, which was brought in during the regime of the Late Chief Minister, Sri. M.Karunanidhi.