A READY TO RELEASE ROMANTIC COMEDY! 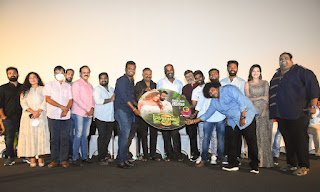 Drumstick was a main ingredient of in AVM’S Mundaanai Mudichu (1983), a blockbuster film scripted and helmed by K. Bhagyaraj who also played the lead!

His son, Shanthnu Bhagyaraj is playing the lead of this romantic comedy the Music Launch of which was held recently on a lavish scale that was attended by a busload of film personalities!

Helmed by Srijar, the film has Athulya Ravi as the female lead besides very many artistes as Yogi Babu, Urvasi, Mayilsamy and Manobala!

Shanthnu Bhagyaraj expressed his happiness at so many film personalities having descended on the dias to attend and grace the event.

Mirchi Siva greeted the gathering in his own inimitable style...

Yogi Babu recollected his early days of struggle when he used to frequently visit Bhagyaraj’s office seeking an opening...

The songs have already turned chartbusters!