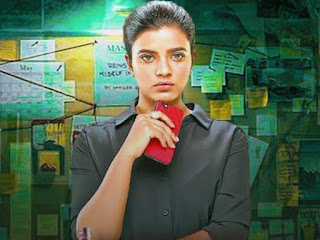 On Sony LIV from July 30th

Thrillers laced with suspense & punctuated by unexpected twists and turns are difficult to make but young filmmaker Vignesh Karthick has made it all appear so simple in this riveting flick that packs a punch at every turn!

A tight screenplay and deft handling of the sequences make viewing an interesting and exciting experience and the director deserves credit for it!

Of late, the kind of characters that Aishwarya Rajesh has been headlining have been daringly different and her character in this film has been created in such a manner that it has offered her enough and more scope to parade her acting acumen! She has in fact gone through the proceedings so well and so naturally that one gets a feeling that she is not a formal female cop but a person who would not hesitate to walk that extra mile to see things till the end!

Subash Selvam as Arjun has executed himself quite effectively but the same cannot be said of Gokul Anand who plays Kishore.

The score of Satish Raghunathan and the camera work of Gokul Benoy have immensely helped to maintain the right kind of tempo right through the proceedings.

The theme unfolds with the investigation of a murder mystery but what makes it interesting is the manner in which the mystery gets unveiled, facilitating the viewers to stay glued to their seats and watch the film with rapt attention!

The final twist in the tale as revealed in the climax is certain to stun the viewers!

A truly genuine attempt by a young yet talented filmmaker...