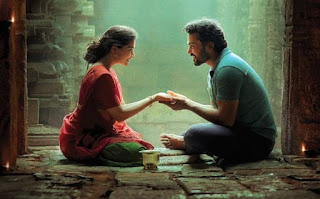 No doubt, films are meant to entertainment; but are also obligated to make the viewers think (and act!), once in a while. Here is one such flick the focus of which is deliberating on the need to preserve and perform agriculture. It has also taken up another agenda-transforming and reforming individuals and making them worthwhile human beings!! The best bargain of this film is the fact that the screenplay has blended both in a very effective manner interspersing it with the necessary commercial ingredients as romance, family sentiments bravery exhibited through action sequences and of course, a liberal dose of humour!

Karthi has virtually shouldered the character of Sultan alias Vikram a Robot creation specialist who has high dreams of accomplishments in that arena.

But the sudden and unexpected death of his dad (Napolean, a neat cameo) draws him swiftly into the life-web of a leader heading about 100 henchmen who would not hesitate to resort to violence in the pretext of being right and fair to those who sought their services! Lal, a trusted lieutenant of the family had in fact (assisted by a few other goons!) brought Sultan up and it was he who had named him thus!

The new Police Commissioner initiates an encounter to eliminate the gang but Sultan meets him personally and seeks some time to make them all give up their violent ways of living!

Incidentally, the gang headed by Sultan heads to a village to offer protection to farmers who face the threat of a corporate giant nursing the thought of exploiting the agricultural land for commercial purposes!

How that is thwarted and in the process Sultan transforms and reforms the thugs into agri-men is the interesting rest loaded with masala ingredients!

Rashmika, the leading lady has to learn the nuances of acting a little more.

Lal asserts his class in an effective role.

Both the villains fail to impress.

In all, Sultan entertains while delivering a message or two!