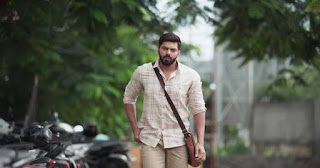 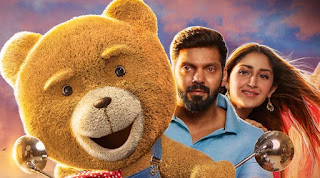 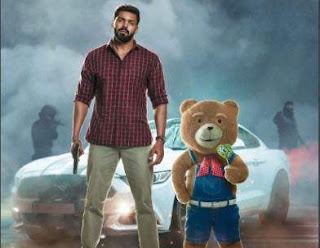 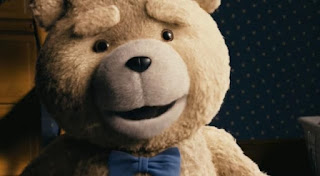 Teddy is in Town! Streaming successfully in DisneyplusHSVIP with the followers of Teddy (bear) on the rise, steadily and stealthily!

Arya appears in a well rounded and well grounded character and has come up triumphs in a character role that stands out as one of his best so far! Sayyeshaa looks exactly like the part that she has donned and goes about her role with customary ease! We only hope that she could have been offered more of screen time, especially given the fact Arya is her real-life pair! Maybe for the same reason, the filmmaker has thought it fit to keep the reel-life pair apart, most of the time in the movie!

Director Magizh Thirumeni who had lent his voice for Anurag Khashyap in a Tamil movie already, stages an entry as an actor here appearing in a character that has dark shades! He stages a belated entry into the proceedings but soon gets squared off by the protagonist in a very uninteresting manner!

Teddy (bear) is in fact the real hero of this flick that dwells on the emotional relationship between a human being and a Teddy Bear!

Teddy does what heroes normally do in such films but in addition to all those heroic deeds, the film’s hero too has his space for his heroic deeds especially in the latter half!

The plot centres around Medical Mafia and the narration deliberates on the role play of hospitals and doctors to deal with human trafficking and organ transplantation!

The film’s second half runs at a rapid pace, especially in those sequences shot abroad! A reasonably good roller coaster ride!