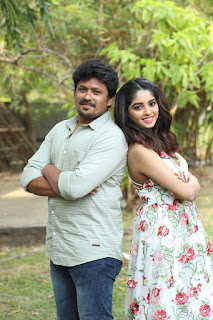 Written and Wielded by - Arul

Producing and directing a movie besides facing the camera and playing the lead role is indeed a challenging task! Debutante youngster, Arul has done the balancing act reasonably well and the outcome is just about a chilling horror thriller that deliberates on the activities of a ghost who takes refuge in the body of those it attacks and attaches itself too! With the production values leaving much to be desired, maybe perhaps to a shoe-string budget, Arul has actually made lemonade with a little lemon on hand!

While the others in the cast just manage to be present, Arul has tried his best to come up with a convincing performance and has managed to make his presence felt in most of the scenes that he appears!

A vehicle break-down halts the journey of a couple of friends who are all on a trip to have fun and enjoy!

They are forced to take refuge in an isolated bungalow along a hilly terrain that looks scary!

An elderly person reluctantly lets them all in but they feel more handicapped on learning that he is mute!

Strange noises are heard and soon it is discovered that a little girl has been locked up in a dark room.

The friends free the girl but soon after lose all their freedom of life as they realize that their life is at stake!

The rest of the plot narrates whether they are able to escape from the clutches of the ghost or whether all of them get victimized!

So does Poositha who is found locked inside a dark room!