THE OBJECTIVE IS TO MAKE PEOPLE LAUGH! 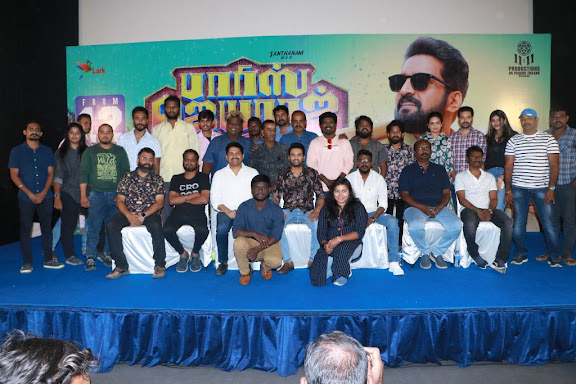 ‘In times of the pandemic that is still threatening people with their lives as well as the increasing medical costs, now that the theatres have been opened up, that too, to their fullest capacity, my main objective is to bring back the audience to the theatres, make them forget their problems for a while and laugh their hearts out, heartily!’ remarked actor Santhanam during a recent interaction with the members of the Media.

The team that made the audience sit through the movie and laugh their hearts out through the movie, A1 is now back in the reckoning with this new family entertainer, Parris Jeyaraj that is scheduled to hit the screens from February 12th 2021.  Directed by Johnson, the film’s Trailer as well as the Gana Songs has already caught up like wild fire in the social media circuits!

It is worth noting that Santhanam and Johnson had collaborated successfully in A1 which proved a box-office hit!

Santhanam further said that Kumar, the producer deserves full credit for the project which was kick-started at the time of the prevalence of the pandemic and with great effort after facing several obstacles, we wrapped up the project! He also mentioned about the purposeful planning of the producer when it was found necessary to spend money.

Sandy has choreographed all the songs while Arthur Wilson has cranked the camera.

‘I have to specially thank them for their painstaking efforts of both the cinematographer and dance-choreographer!’ added Santhanam who also made a special mention about the several sittings he had for story discussions with the director to ensure that everything worked out well with the script, especially the comedy portions!

Santhanam complimented the art director as well as the editor for their commitments towards the project.

He showered heaps of praises on Santhosh Narayanan, the scorer for his brilliant compositions that have brought up some good numbers!

Once a team succeeds, their next venture paves way for a lot of expectations. As a team, we are sure that Parris Jeyaraj made by the same winning team will also emerge a winner! –he signed off!