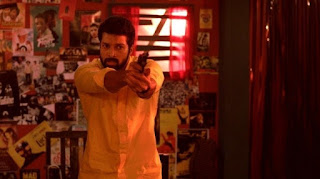 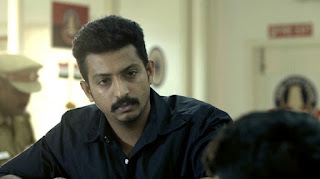 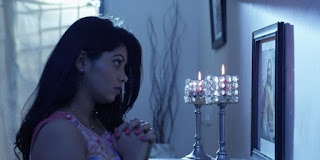 Not many filmmakers consider the art of filmmaking as a serious business while looking at it only as a commercial proposition with a view to succeed commercially!

With a foreword from Madhan, the celebrated cartoonist turned film critic, the film explores the intricacies of looking at the art of filmmaking as a serious business with the objective of putting forth some informative thoughts for the viewers after putting in a lot of research based efforts in the direction!

But do such discerning filmmakers find producers to translate their thoughts on the big screen so as to make it a full length feature. A billion dollar question, indeed!

Sridhar Venkatesan has put in his best efforts to sketch the tale of one such filmmaker who takes in a folk artiste & stage artiste so as to focus on the nuances of both the forms of art that command very little response in the contemporary scenario!

Santhosh Pratap who has of late been choosing the right kind of characters to grow in stature and strength in the competitive arena of acting plays Sathya a short filmmaker who stumbles upon an opportunity to helm of feature film that too with a big hero!

All seems perfect on paper and even a Press Conference is convened! But on the appointed day of the start of shoot, he gets kidnapped by a mysterious man who takes him to a place smelling of films all over!

The film’s climax raises some pertinent questions as to how aspiring filmmakers who deserve a great head-start but end up failing miserably owing to want of patronage and support!

Athulya appearing as Santhosh’s wife hasn’t much to do in the proceedings excepting to look good!

Deepak Paramesh cuts a fine cameo as a cop.

Worth taking a look.