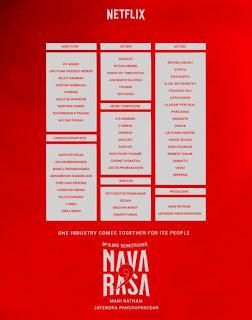 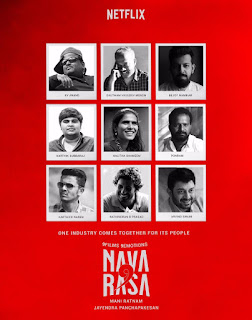 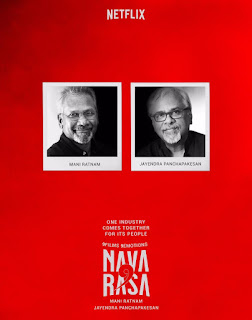 The nine-film anthology will narrate stories across nine ‘rasas’ (emotions), to launch exclusively on Netflix across 190 countries

Navarasa brings together the finest talent of the Tamil film industry. In this exciting anthology, nine directors Arvind Swami, Bejoy Nambiar, Gautham Vasudev Menon, Karthik Subbaraj, Karthick Naren, KV Anand, Ponram, Rathindran Prasad and Halitha Shameem lend their incredible talent to bring their distinctive perspective on each rasa. The nine short-films feature a stellar line up of over 40 cast and several hundred creative and film technicians. The incredible creative community of Tamil cinema has united to send a strong message of solidarity and resilience and graciously offer their services pro-bono. They will contribute the proceeds from the films towards the well-being of film workers in Tamil cinema impacted by the pandemic.

Speaking on this collaboration, Mani Ratnam and Jayendra Panchapakesan said, “We have always loved the idea of brainstorming to come up with unique ideas for raising money for deserving causes. This time, we were brainstorming for the cause of our own industry and to alleviate the agony of our people who had no work for months. The idea of producing short films and raising funds through them was born on one such brainstorming evening. We were thrilled that the idea resonated instantly with all the leading directors, actors and technicians we approached. Navarasa was a spark of an idea when we discussed it. The industry has come together to  passionately transform the nine emotions  into nine films and make it count  for the audiences, the cause, the industry  and  its people. We are happy that Netflix has come forward to take this confluence of emotion, talent, people and the cause to the world.”

Srishti Arya, Director, International Original Film, Netflix India said, “We’re thrilled to be the home to these nine extraordinary films. We admire how this wonderful ensemble of filmmakers and talent have joined hands to support the creative community. Navarasa is a celebration of the craft of filmmaking and the magic of Tamil cinema that we can’t wait to take to the world.”

Netflix is the world's leading streaming entertainment service with over 195 million paid memberships in over 190 countries enjoying TV series, documentaries and feature films across a wide variety of genres and languages. Members can watch as much as they want, anytime, anywhere, on any internet-connected screen. Members can play, pause and resume watching, all without commercials or commitments.

For the latest news, updates and entertainment from Netflix India, follow us on IG @Netflix_IN, TW @NetflixIndia and FB @NetflixIndia

The Navarasa anthology of short films was conceived by directors Mani Ratnam and Jayendra Panchapakesan (co-founder, Qube Cinema) as an initiative that will raise funds to support those in the cinema industry who have been acutely affected by the COVID-19 crisis. The project is being produced under the banner of Justickets, in association with AP International and Wide Angle Creations as executive producers. All the talent and companies involved in the project have offered their services pro bono, with the sole objective of supporting the industry at large.